“Koyannisqatsi” is the first film of “The Qatsi Trilogy”. The film is directed by Godfrey Reggio with Ron Fricke and Philip Glass responsible for cinematography and musical score respectively.

Ground breaking for its day, there is no plot or dialogue in the movie.   Koyannisqatsi consist entirely of synergistic music and imagery which is shot and played back in time lapse or slow motion.   The scenes range from the natural beauty of the Grand Canyon to the destructive power of the nuclear bomb to provide a breath taking critique on modern life which as the title suggest is a crazy and out of balance existence.

Some of my favorite montages in the movie include sequences from sausage making machines cutting to Grand Central escalators crowded with people at rush hour.  Or the ariel view of the city morphing into a microscopic view of computer circuitry.  These montages induce a hypnotic like trance in the viewer by going from slowmo to time lapse and back to slowmo all set to Philip Glass’ organically composed minimalistic musical score.

The shots go from very formal composition such as the view of the stock exchange floor that has multiple exposures with ghostly trails of people going backwards and forwards in time.  To the handheld time lapsed street photography on the side walk.  The amount of fun the film makers had while making is translated directly to the viewing experience.

Koyannisqatsi is a definite must see for all film and photography fans alike.  It will make you think twice about what exactly is important to you.  Godfrey believes that we are now living in the “host of technology” and freedom comes from knowing when to reject or embrace IT and not let IT determine how or when we use IT.  Looking forward to watching the other two films in the series and also seeing the director’s latest film “The Holy See”. 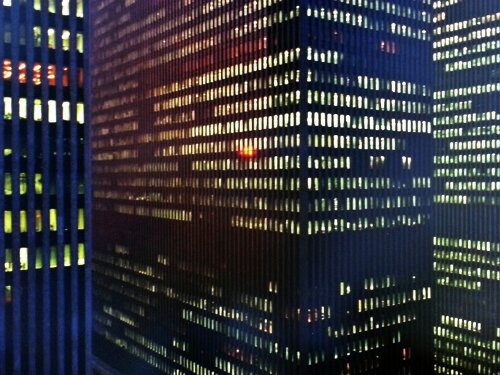